Valiya kulangara Amma and Velan
Once a person after seeing Valiya kulangara devi’s idol commented ‘what a radiance for Devi?’ This remark was believed to have caused ‘Drishti dosha’ for Devi. This has resulted in many untoward incidents in the village. The Temple authorities immediately consulted Chittisseril Kaniyaru (astrologer) and confirmed the ‘Drishti dosha’. The solution was to do an action (Othuka) with the bark of Elengi (Mimusops elengi) by a Velan (a social caste), which the authorities conducted without delay.The Velan had Devi’s vision in a dream and she commanded him to be with her always. The Velan who was brought from another place settled in the village as per Devi’s wishes expressed through the dream. On the first day of the Malayalam month the ritual of keeping a Para (a wooden measure/container full of paddy seeds) and ‘Elengi thukalu kondu Othuka’ (A particular ritual of using the bark of the Elengi tree to perform “othuka’). This custom is performed on the first day of every Malayalam month and is still being done uninterruptedly by the descendants of the Velan who first started it many generations back. It is to be noted that the presence of ‘Velan’ is seen only in Kodungallur Devi Temple and Valiyakulangara Devi temple. 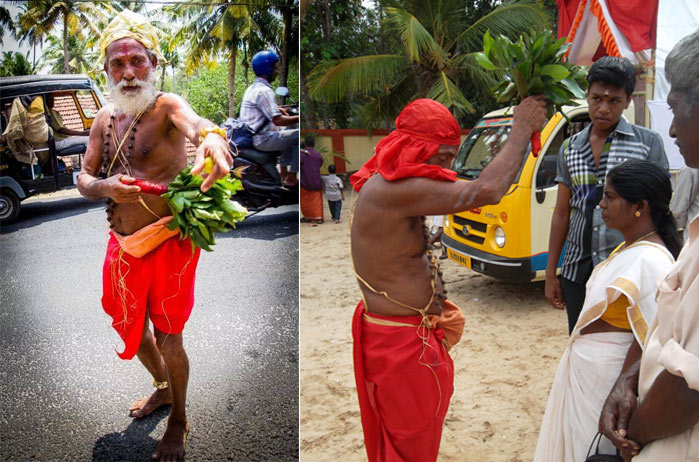 Velan Pattu / Para kotti Pattu (Velan song)
It is one of the traditional ritualistic art form of Kerala performed by the members of the ‘Velan’ community among Hindus. This art form is now being died out. Velan pattu is being conducted at homes to remove ill luck /misfortune. The main item of ‘Pallipana’ (a rare ritual which is observed once in 12 years) of Ambalapuzha temple is Velan pattu.


The ‘para kottipattu’ at Valiyakulangara Temple is being conducted uninterruptedly till now. The preparations needed for this are very simple. The requirements are a nazhi (measuring container made of wood or bronze) full of grain, a lighted traditional Lamp (Nila Vilakku) and a mat (made of dried pandanus leaves which are sliced into thin strips) to sit and sing. The percussion instrument called ‘para’ (not to be confused with the grain measure container ‘para’ ) is performed in front of the ‘Nila vilakku’ and hence the name ‘Para kottipattu’ (song accompanied by rhythmic beating of percussion instrument ‘para’ , ‘Pattu’- song) . Parakotti pattu is mainly done to clear ‘shanidosha (bad effects of the planet Saturn) and difficulties, troubles and obstacles caused by sight, tongue, and evil practices by ones’ enemies.

The Velan pattu starts with hymns to please Lord Shiva whose abode is ‘Kailasam’. Then, Lord Ganapathy and Lord Subramanyan are appeased through songs. Bhadra kali songs are also used to be sung. The main song which is the ‘Mahabharatha’ story is sung after these introductory hymns. The Velan pattu ends with the praise and narration of Lord ‘Maha Vishnu’.


The attire of the Velan consists of a headdress, dried fish on one ear and raw cashew on the other and red silk dresses. The Velan is ever present with valiyakulangara Amma (called Jeevitha) and this is to ward off the ‘evil eye’ troubles if it ever happens to Amma.

The Thiruvabharanam (sacred ornaments) and its return
The temple was initiated by the Travancore royal representative ‘Thampi’ as a result of his ‘bhajana’ at Kodungallur devi temple. The sacred ornaments made of pure gold were devotedly offered to the Devi by the Travancore King. When the Travancore king ‘Sree Moolam Thirunal’ was ruling there was an economic crisis and people were in utter penury. The royal coffers were depleted. The King was in a very difficult situation. To overcome the economic issues the King has decided to take possession of the ornaments and other valuables of the temples of the Kingdom. This measure was to fill the coffers and find an instant respite from the economic issues.

The royal authorities accompanied by soldiers visited each temple and collected the valuables and they finally visited the Valiyakulangara temple. The authorities collected valuables with many ornaments and the pure gold sacred ornament of the Devi. The King along with his accountant visited the royal coffers to observe and estimate the collections from the temples. They observed an unusual trembling of a particular box containing ornaments and found it was from Valiyakulangara temple and it contained the sacred pure gold ornaments of the Valiyakulangara Devi. The royal astrologer on consultation recommended the return of Devi’s ornaments to the temple and advised penance which was done with devotion. Later after the annexation of the temple to ‘Travancore Devaswam board’ there was an event which was astonishing. The ‘Thiruvabharanam’ (sacred ornaments) were put on the Devi only on three days (Aswathi, Vishu and Thiruvonam) in a year. The ornaments are safely kept in the storage house in Harippad . Since Valiyakulangara temple was a minor temple (classification by Devaswom Board on certain parameters) and the use of ‘Thiruvabharanam’ was limited in a year the Board authorities have decided to make use of its’ gold for making the ‘Dwajam’ (flag /flag post) for another temple which comes under the jurisdiction of the board. To replace the Valiyakulangara pure gold ‘Thiruvabharanam’ it was decided to make a gold plated replica. The ornaments were taken to the goldsmiths at Aranmula. The same night a Brahmin residing near the temple had a vision of Devi in a dream in which she said ‘they have taken me to melt’. The next morning at the temple the Brahmin disclosed about his dream and Devi’s words. On hearing this the devotees enquired about the whereabouts of the ‘Thiruvabharanam’ and found the truth which was exactly disclosed in Brhmins’ dream. The devotees were agitated and made a ruckus and brought back the ‘Thiruvabharanam’ from Aranmula. Henceforth they have decided to adorn Devi with ‘Thiruvabharanam’ on the first day of the every Malayalam month.


The story of Muslim Rakshassu
In olden times there was a muslim sorcerer at Mahadevikadu region. He was very popular for his magical powers. One night he was walking by the Valiyakulangara temple to his house. To test the popular saying that the all powerful ‘Devi’ is at the beck and call’ of the devotees, he called out ‘ Kali (another name for Devi) Are you there? Instantly the shrine door opened with a loud bang and Devi presented herself in her fierce looks and attire. The terrified muslim sorcerer somehow managed to run home. He caught heavy fever and died soon. Though he died he was believed to have attained ‘Moksha’ . Later his spirit was invoked and put to rest in a place at the west side of Devi’s temple. Still the people of all religions worship and pray at the resting place of this great sorcerer who got ‘Moksha’ through Valaiyakulangara Devi. Valiyakulangara temple sends the message of religious harmony in worship through ‘Parayeduppu’ which is not restricted by any religious boundaries.


Prawns and Mangoes
Years back when the temple festival was in full swing a woman was making prawns and mango curry in her house in the village. She was in a rush in making curry for the fear of being late for the festival. While praying the ‘Devi’ that if the curry could be made faster she would be able to attend the festival in time she found an old lady of around 70 in front of her house. The old lady smiled as if she knew the woman and told her to attend the festival without worrying about the curry, which she volunteered to take care. The woman was suspicious about the old lady’s unsolicited help. Knowing this, the old lady revealed that she is from the same place and she felt tired and thought she would rest there for a while, and if the woman did not believe her she would leave. On hearing this, the women asked her to rest and have meals before she leaves. The woman went to temple happily to enjoy the festival. On her return she could not find the old lady but found the curry removed from the stove and kept covered safely. This appearance of a strange old lady made the village people to carry out a ‘Prasna’. It was revealed that the old lady was ‘Valiyakulangara Devi’ who visited the woman to help her attend the festival on hearing her prayer. From that event onwards the natives ritually make Prawns and Mango curry for the Aswathy festival feast every year.